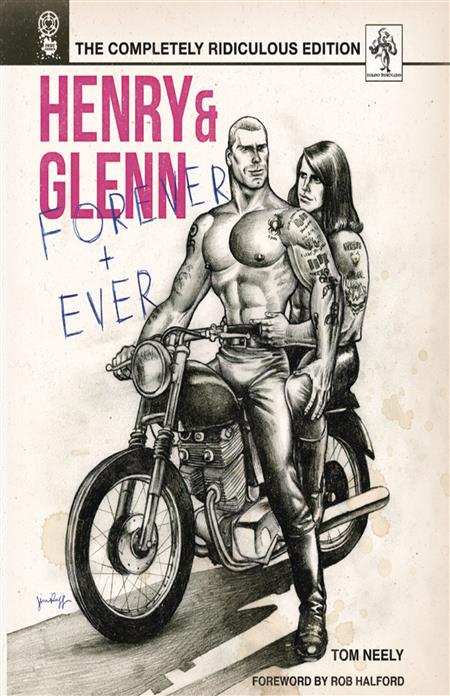 Two men. Two myths. One Legend. The greatest love story every told has finally been released in graphic novel form. This epic tome features twenty short stories about the domestic life of 'Henry' and 'Glenn' and sometimes their neighbors 'Daryl' and 'John.' ('Rollins', 'Danzig', 'Hall', and 'Oates' for the uninitiated.) Digging beneath Glenn's bricks in the front yard, Henry uncovers Glenn's mother. Freshly unearthed, she moves in with him and Henry. Glenn's issues come to the surface as she critiques his art, replaces his wardrobe, scrubs their dungeon, and recalls his childhood. Later, Glenn tries to sell his signature to a UPS driver, takes a punch, and has some daydreaming adventures with a plunger. Henry, 'a loud guy with a good work ethic,' shows his darker side and indifference to a fan as he drinks black coffee and bonds with Glenn over their distaste for their own bands. These are two men who truly suffer best alone together. Among other hijinks, Henry and Glenn go to therapy together, battle an evil cult in the forest, and profess their love for each other, all while dealing with jealousy and other normal relationship problems and trying to figure out if their soft-rocking neighbors are actually Dungeons and Dragons playing Satanists. The saga of Henry and Glenn is a true testament to the power of love to overcome even the biggest, manliest egos of our time. This ridiculously complete edition collects four serialized comics, the trade paperback, the original 6x6' book, and adds stories, pin up art, and full color covers from the original series.